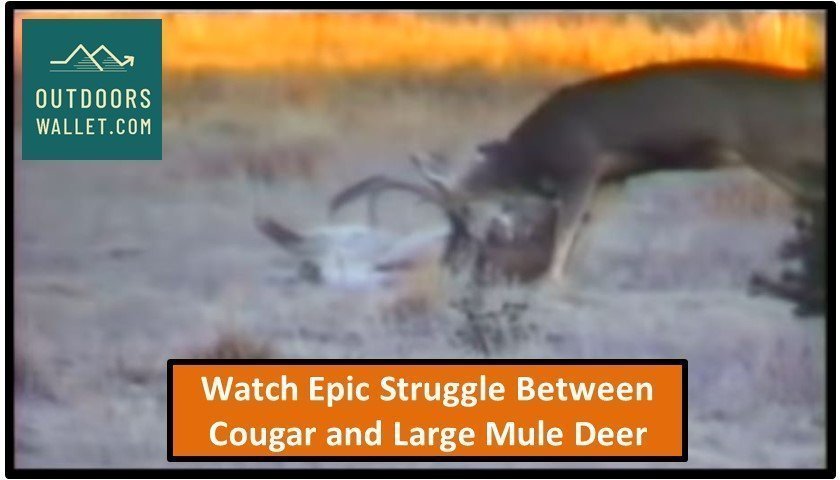 Can this cougar withstand repeated kicks to the head from this buck, after going for the jugular? In rare wildlife footage, watch this battle to the end that does not resolve quickly at all. In fact, you will find yourself wondering which will prevail – predator or prey.

It’s difficult enough to get any footage of mountain lions at all, much less hunting prey, so when this 2001 video from New Mexico recently resurfaced we just had to share it too.  While early on the mountain lion accomplishes a takedown, from there it looks like it has met its match.

Whether small or large prey, this cougar does what cougars do best – goes for vulnerable spots including the back of the neck, under side of the neck, and then works to crush the buck’s nose and nasal passages.  The big cat’s initial goal is the neutralize the buck, then suffocate it.

But even as prey, this buck has plenty in store for the predator, and doesn’t give up at all.  The mule’s thick neck, sharp hooves, and antlers, all fueled by flaming testosterone from the fall rut makes him a formidable target the cat may wish he had never tried.

We find it strangely curious how close the mulie’s herd mate comes to watch the action, rather than running tail up for the hills.

If the picture is a little jiggly, no matter – before this incredible footage the video host provides some useful narration, including estimates of their comparative weights – the buck at about 265 pounds and lion at about 150 pounds. Even with the large weight differential, the mountain lion is clearly ready to fight for his dinner (and then some).

Beware in advance that this video is graphic and may be disturbing to some viewers.  It is however the reality of daily life and death in the wilderness.  For anyone who claims hunting is a cruel way to secure venison, they are likely to reconsider after viewing this epic struggle with obvious suffering on both animals parts.

Watch to see how this epic struggle – really a fight of all fights – unfolds, and whether the mountain lion will come out empty handed or instead be satiated for days to come.

8 Ways To Earn Passive Income For Outdoors Sports Enthusiasts
Scroll to top
error: Please contact us for authorization to use our original content. We fully enforce our Copyright and Trademark rights, and unauthorized use is prohibited.